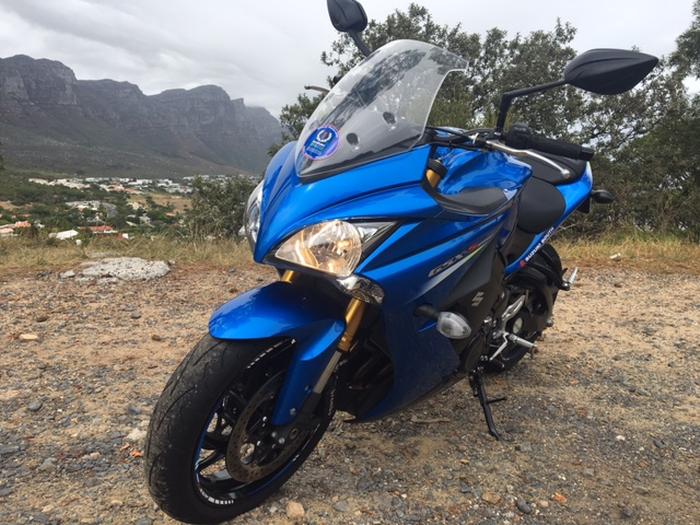 Posted at 10:26h in Motorcycle Reviews by admin 0 Comments

It’s always a pleasure testing bikes in Cape Town. I’ve been waiting for Suzuki to come out with something exciting to test, and I was more than pleasantly surprised with the new GSX-S1000F Sports Tourer. The photos simply don’t do the new Suzuki any justice. It’s only once the bike was standing in front of me, that I realised what a stunning-looking motorcycle it is.

What I liked about Suzuki South is that even though they knew me as a rider, they still took the time to talk me through a few relevant specs, new and old, and the little extras they decided to add to the bike. To be fair, the GSX-S1000F does not need extras, but something as basic as rim tape is actually an option I would add, now that I’ve seen one with and without. To get to the more serious stuff though, this 1000F Sports Tourer puts out some serious power, and incredibly quickly.

If you were a fan of the 2005 GSXR motor, also known as the K5, then you will understand what makes this motorcycle so unique. This K5 may have been one of the best Suzuki builds to date and although the GSX-S1000F is slightly detuned, it’s hardly noticeable. The Suzuki has great torque, especially mid to top range, but if you are a slightly nervous rider you may find the throttle to be a little aggressive. Personally I love it – I think it’s what makes the bike exciting to ride. Once you get used to the throttle, it’s easy to control the power and enjoy all of its 144 h/p built into the chassis (that’s also from the K5 model).

The chassis, together with the higher handle-bar position, allow for direct and easy input to turn the motorcycle quickly and effortlessly. It’s one of the lightest and nicest-handling bikes I’ve ridden on twisty roads in a while. Some might think the suspension is a bit stiff, and over some bumps it may well be (if you weigh under 60kg). But let’s remember that the forks are fully adjustable and will allow you to personalise the ride for your weight and style of riding. Appearance-wise, I have to say this again: WOW! It’s a stunner of a bike with just enough fairing to give it that sporty look (recommended by Suzuki South: personalised rim tape).

I’m excited to see the naked bike version that’s coming soon! The screen also suits its shape and size, and helps a great deal with wind disturbance. If I have to critique one small thing, I’d say an adjustment option on the screen would’ve been very helpful, especially for taller riders.

For all this, along with ABS and four-level traction control, you’d think the price would be steep. Surprisingly not! The Suzuki GSX-S1000F is currently selling for approximately R163 000. If this suits your budget and is your type of motorcycle, I recommend arranging a test ride from Suzuki South in Cape town or the nearest Suzuki dealer to you.

IMPORTANT note: when you test ride a motorcycle, make sure you get the kind of service that Suzuki South offers. Tyres pressures were correct, the bike was clean and had plenty of fuel. For more detailed specs, see below.