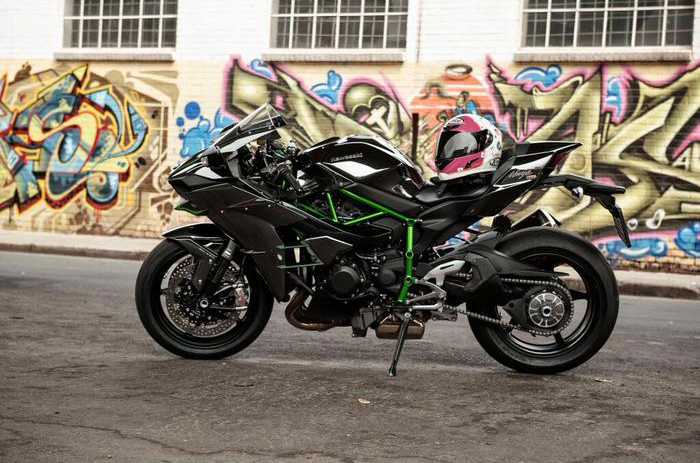 Posted at 09:48h in Motorcycle Reviews by admin 0 Comments

The Ninja H2 is not merely a high performance motorcycle.  It is a crystallisation of advanced technology born from the collective efforts of the KHI group.  In 1971 the Kawasaki H2 road bike took the world by storm with an engine that delivered the world’s fastest and most intense acceleration.  Resurrecting a legendary name from Kawasaki’s illustrious history, the Ninja H2 will once again redefine the standards by which motorcycles are judged.

By now I’m sure you are aware of the fact that the Ninja H2 has a big brother, Ninja H2 R.  I had the privilege of testing the H2 but unfortunately we don’t have an R to test in South Africa due to the limited amount of only 6 we received. I can only imagine an incredible high demand across the globe.  One of the biggest differences would be the price, however below are some specs to show more specifics.

Another fundamental difference is that if you were one of the lucky ones who could afford the H2R and book one before 19 December 2014, you would have had to sign an acknowledgement stating that you will only ride the Kawasaki H2R on the track and that you accept buying it “As is”. In other words there is no warranty and you accept full responsibility of your own safety when you ride this machine.

Fortunately if you have about R320 000 you can buy yourself the H2 street version.  In my opinion it’s all the ‘bike’ you need! It’s one of those machines you will either regret not buying, hate yourself for selling it or be proud to have one parked in your lounge for the rest of your life.  I know my choice, now it’s time to calculate some numbers and save up!  We only have 70 in South Africa and after riding the H2 for a weekend, I can tell you that I have not been on a bike with this amount of power (200hp) that handles this well on high speed (300km/h) as well as through corners.  I can only agree with others that it is due to Kawasaki keeping the zx10 wheel base and using the trellis frame (not normally used on a Japanese superbike), that allows for the necessary stability on high speed and flex for cornering where necessary without jeopardising any handling.  Frankly it’s just phenomenal and even better, if you have one you don’t have to share it because it’s only got one seat!

Find out more on our #AutoCentral show (CLiffCentral.com)